In the third episode in our series of 1 Year of Zzoomm interviews, we speak to another of our early customers in Henley, David.

With a long history and technical background in the telecommunications world, retired American ex-pat David knows a thing or two about telecoms and broadband.

Having first heard of Zzoomm Full Fibre Broadband around a year before we began digging in the area, David became an active voice in the local Zzoomm group here in Henley. Providing us with a good indication as to how residents use the Internet, what speeds they’re used to, and what sort of prices they’re prepared to pay for broadband packages In Henley.

So, with such an informed background in the industry, what persuaded David to switch to Zzoomm?

While David and his wife aren’t hardcore streamers or gamers in need of blistering download speeds, they were still looking to future-proof their household to ensure all their current and future devices, from their two computers, phones, iPads, TV, CCTV and even Hive home tech setup, had enough bandwidth to comfortably cope with whatever was thrown at it.

Before switching to Zzoomm, David found that his BT connection was, on the whole OK, but found the weather could affect his download and upload speeds, impacting his wife’s regular Zoom calls with her genealogical society or his occasional photography hobby.

“The service was OK, but the best download speed we could get was about 30Mbps, with an upload of about 6Mbps.”

As many of our customers are finding, while they may be subscribed to a ‘fibre’ package, it’s usually only fibre to the cabinet (known as FTTC), while relying on the 19th-century copper telephone technology to connect their home, which, as David pointed out – can easily become slow due to weather, distance from the cabinet itself or even just more people binge-watching the latest Netflix release.

Since David lives about ⅓ of a mile from his closest cabinet – he certainly experienced this himself, which is why he made the switch to Zzoomm.

“I knew that if it was fibre right to the premises, the speeds would be there, without depending on the copper cable that’s been decaying in the ground for 60+ years.”

“Since we’re retired anyway, our usage habits haven’t changed altogether too much. Although, with more time on our hands, we tend to spend more time online than before.”

Despite David and his wife Joyce’s light usage habits, just knowing his new connection from Zzoomm was there was peace of mind with the speeds and bandwidth for future use.

Something which came in handy when their daughter, a teaching assistant, and two teenage grandsons came to stay last year. The fast download speeds from his new connection were more than enough to cope with both boys taking part in online learning in one room while his daughter taught over Microsoft Teams in another.

“They were learning online during the day and on their games and gizmos the rest of the time. It was more than fast enough for us all; we couldn’t fault it.”

This peace of mind, just knowing the reliability is there is something we often hear from customers, whether it’s ordering groceries online, requesting prescriptions or staying in touch with your family – it’s there when you need it.

An unexpected bonus for David was when Zzoomm chose to temporarily upgrade everyone in Henley to our blisteringly fast 900Mpbs service as a goodwill gesture during the first lockdown. He found his large photography files were uploaded in split seconds vs several minutes when using the traditional copper connection he had before getting Zzoomm.

“It was incredibly fast. I can certainly see why those who use a lot of data and depend on it for work would upgrade to such a service.”

We take great pride in our dedicated team of in-house installers, which allows us to go above and beyond other ISP’s when it comes to our installation process. Something definitely felt by David when we connected his home in February 2020.

“The process was really good. Since our house is on a corner, we had some specific requests about where we wanted things installed, and the team were more than happy to oblige. The team who came to do it were great; they talked me through how to use it, where they should install our two hubs to get maximum coverage over the house, the lot. An excellent job of installation.”

One hiccup occurred during the initial installation for David, his iMac, for some reason – just wouldn’t connect to the internet. While the installers did their thing, they called in the cavalry – our Area Services Manager Ricardo, who sat down with David and had the issue fixed within the hour.

“Which certainly is not the sort of the service you could get from BT”.

The Future of Full Fibre on House Prices 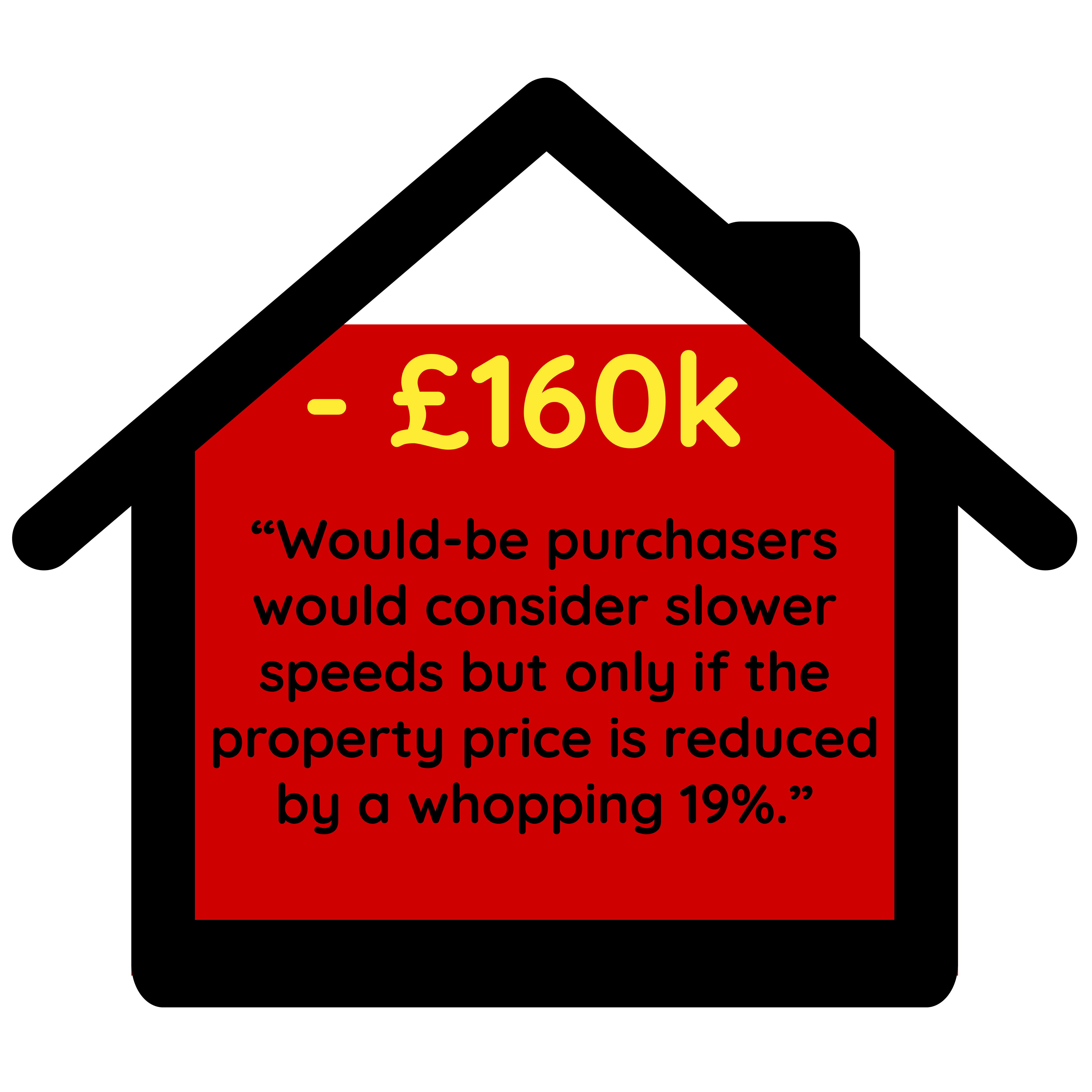 Reliance on home broadband has increased dramatically over the last decade with more of us spending time working from home. The reliance on such connectivity has only surged exponentially over the last 12 months and we don’t expect such dependence to wane as lockdown eases, the working world has shifted to new patterns and a new culture.

With only 18% of the UK having Full Fibre in 2021, up from 7% in 2019 the supply for fast, reliable Full Fibre broadband simply doesn’t meet demand. Looking back at the last 15 years LSE examined historical data across over a million homes, which showed that a house’s price increased by 3% when broadband speeds doubled.

The Covid-19 pandemic has dramatically increased this demand as evidenced in February 2021 when the UK Government released a new report which revealed Full Fibre broadband “sparked a surge in home values of up to £3,500.”

Dramatically, however, the lack of fast and resilient broadband could have a far more unfavourable outcome for homeowners. Fast internet is one of the top priorities for prospective home buyers. Would-be buyers would only consider purchasing a property with slow broadband if its asking price was reduced by 19% according to the latest survey. In Henley, that’s an average of over £160,000.

We asked David what he thought of this.

“With more people working from home, often simultaneously, I can definitely see this making an impact on the saleability of houses from now on. A strong, viable connection is expected.”

What Would You Tell Others Considering the Switch to Zzoomm?

David wanted to reinforce what he’s seen others mention online about the differences between Wi-Fi coverage in your home and the speed of your broadband. Whereby you could have the fastest connection available, but if you don’t have full Wi-Fi coverage throughout, you will still find the ‘net to be sluggish or even dropping out completely the further away from the hub you are.

Many of our customers can avoid this problem since we offer two hubs as standard with every Zzoomm service, giving you greater coverage. You can also purchase advanced routers broadband network tools to increase your coverage. Our broadband teams are happy to share their experiences with these and what they recommend.

And finally, as we finished up our chat, David left us with one lovely final comment:

“I would say it’s well worth it. The price is comparable to other providers in town for the smaller packages like 100Mbps for £29, while the speeds are second to none. We’ve had nothing but positive experiences, with a good connection and an excellent customer services team”.

Thanks again for chatting with us, David.

Zzoomm is brilliant for those with only a few devices and  families with lots of connected devices. With a choice of broadband services fit for families, couples, singletons, house shares and everyone in-between, starting at only £29 a month, there’s a Zzoomm Full Fibre service perfect for whatever you need. Check your postcode below or give us a call to discuss your setup