Here on the Zzoomm blog, we’re launching a new series of Meet the Zzoommer posts. Each week we’ll be speaking to another Zzoomm customer to learn more about them, why they made the switch and how our Full Fibre broadband has helped them do more and enjoy more over the last 12 months.

In this week’s interview, we spoke to someone pretty special to the Zzoomm team.

Someone who’s been with us from the start, in fact, this person helped to shape the Zzoomm service we have today, one of Henley’s very first residential customers, Kevin James.

So, without further ado, let’s jump straight in.

Meet Kevin and his 63 connected devices

“Without sounding dramatic, life really has been life-changing since joining Zzoomm.” 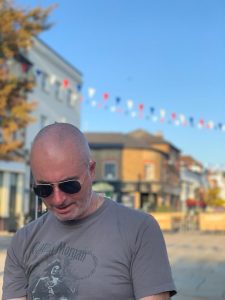 Kevin James works for the NHS, looking after the digital analytics and intelligence for South Central and Western England; his work has been critical over the past year, playing a pivotal role in COVID and vaccination modelling for the region.

Shortly after the lockdown began, Kevin switched from working 3-4 days in the office to a full-time working from home arrangement, which can see him having over 10+ hours of remote meetings a day.

The same can be said for his wife, a local school teacher, who’s been kept busy doing everything from uploading classes to their school learning platform to teaching and holding assemblies over Zoom.

With Kevin, his wife, his two daughters and even his granddaughter all under one roof this year, his household is busier and full of more tech than ever. In fact, between his family’s phones and iPads, laptops and home tech, alongside his servers and work computers, a whopping 63 devices are connected to the net at any one time.

63 devices, seems like a lot doesn’t it? Try counting up every device in your home, from your phones to your household smart tech – it may well surprise you how many you have.

This is fast becoming the norm for many of us as we select connected devices that tax the traditional broadband network of many Fibre to the Cabinet (FTTC) providers such as BT and TalkTalk.

As you can imagine, with everything from gaming to cloud backups, let alone his family’s streaming and social media use, is it any wonder Kevin was so eager to ditch his flakey broadband connection in favour of a faster, more reliable Full Fibre supplier connected directly to his home?

Why Kevin switched to Zzoomm

Not only does Kevin’s job revolve around remaining connected, as an avid online gaming and Destiny 2 fan – he knows full well that a strong, fast and reliable connection for both Download and Upload speeds is more than just important; it’s essential. Unfortunately, his previous connection with BT was none of these.

Imagine having an intensive job like Kevin’s, with multiple cloud-backups a day, alongside a passion for tech, gaming and a hobby that involves capturing drone footage. Put it all together, and you’re looking at a hefty amount of data that needs uploading.

“At peak times, we’re pushing the boat out, transferring more than 30GB of data a day.”

Kevin found that his previous connection just wasn’t cutting the mustard. Both downloads and uploads were incredibly slow. As an example, before joining Zzoomm, a few hours of drone footage would take almost an entire day to upload, and slow down the rest of the household activities at the same time.

Since joining Zzoomm, Kevin’s been able to avoid the arguments about hogging the bandwidth as these same uploads now only take just a couple of minutes to process.

As you can imagine, due to his work’s critical nature, the reliability of his connection is essential. Unfortunately, just like his speeds, his BT connection was letting him down weekly.

“The connection was pretty poor. I had to reboot the router around three times a week just to get me back online.”

“I was looking for a solution for a while, so when I first heard about Zzoomm, it was a case of ‘where do I sign?!’”

Kevin first heard of us while we were still in the planning stages of our rollout here in Henley; after coming along to one of our roundtable insider events, he was convinced by two things – our proposed speeds and our packages.

“The whole thing was pretty unbeatable. The price was crackers, so, along with a rolling contract after just 12 months, it only got better – pretty outstanding, and it’s now cheaper than BT.”

Kevin’s road was one of the first we built our Full Fibre network on.

“The installation process was bang-on. The whole install was neat and tidy, taking no more than an hour or so to get us connected. Faultless.”

But, we can’t always get things right. Unfortunately, over the summer, Kevin reported a small infrastructure blip which momentarily resulted in some downtime. However, after contacting our 24/hour support line, we had him back online in a matter of hours.

“I was so impressed with the customer comms team. They fixed the issue immediately and, as a gesture, didn’t charge us for the month. They’re so easy to get hold of and we were checked in on us a number of times after to see how we were getting on. Excellent comms.”

How Zzoomm Has Improved Life for Kevin and His Family

“To be honest, it’s just become part of our DNA. Just as you turn on a tap and know the water will pour out, you assume it will work when you go to use it. I now don’t have to worry about things going off; I know I can rely on my connection.”

Life with Zzoomm has undoubtedly improved for Kevin and his family. He no longer has to worry about the reliability of his connection, so whether he’s uploading drone footage, or taking part in Teams meetings, he’s been saved from the family disputes about hogging the connection.

“No matter how many of us are online, it works as if we were using it alone. My wife can be watching 4k TV while I’m downloading the latest 90GB* Destiny 2 patch – without any issues.”

He’s already bent the ears of his family and neighbours about making the switch to Zzoomm and has one final thing to say if you’re on the fence or struggling with a poor connection:

“With Zzoomm literally on our doorstep here in Henley, why continue to put up with issues? Their customer team is easy to talk to, and you’ll probably save money in the process. Just get in touch today.”

Thanks very much for chatting with us, Kevin.

** With Kevin’s 900Mbps package, it took him just under 14 minutes to download and unpack the latest 90GB Destiny 2 patch. Allowing him to get playing 4-5 hours faster than he could with his previous BT connection.

Zzoomm is brilliant for both families with lots of connected devices and those with only a few devices. With a choice of broadband services fit for families, couples, singletons, house shares and everyone in-between, starting at only £33 a month, there’s a Zzoomm Full Fibre service perfect for whatever you need. Check your postcode below or give us a call to discuss your setup