13 October 2020, Oxfordshire, Zzoomm, the 100% Full Fibre broadband network operator, has announced that the UK’s fastest broadband service will commence its build in Hereford as the next stage of its nationwide Full Fibre network rollout. This announcement follows on from Zzoomm’s recent £100m funding round secured at the end of September. 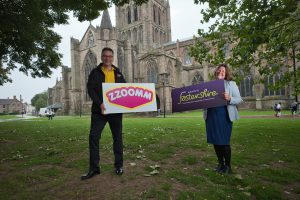 Zzoomm is nearing completion of its current Henley-on-Thames network build and will soon begin this vital infrastructural roll-out in Hereford. Construction will commence early in 2021, and the new Full Fibre network is planned to cover the entire city.

Zzoomm’s business and residential services, offer blistering broadband speeds starting at 100Mbps and reaching up to 10Gbps to work, stream and play, and will serve over 28,000 homes and businesses in Hereford.

With the critical nature of fast, reliable broadband at home highlighted in the past months, residents of Hereford will shortly be able to access the UK’s fastest home broadband service. This means no more fighting for data split between working from home or gaming, no more waiting for movies to download, as homes in Hereford will be able to access broadband speeds of up to 2Gbps. Zzoomm’s speeds are also supported by free installation as standard, 24/7 customer service and a Double Wi-Fi setup with two Zzoomm Hubs providing more Wi-Fi coverage in homes.

Full Fibre business broadband is now recognised as critically important infrastructure for the UK and Zzoomm’s best business services begin at 100Mbps but can provide the bandwidth needed by each business up to 10Gbps on dedicated fibre connections. As Hereford pivots to a new business as usual, Zzoomm’s full fibre network will enable local businesses – which range from cider producers to meat suppliers to metal manufacturers to creative agencies – to connect at faster speeds than ever before!

Zzoomm was founded in December 2018 by broadband industry veteran Matthew Hare. Zzoomm is expanding this Full Fibre service to towns and suburbs nationally and aims to pass 1 million properties by 2025.

“The commencement of our network roll out in Hereford in the New Year marks the opening of a new exciting chapter for residents and businesses in the area. The people of Hereford have been stuck with old fashioned copper broadband for too long, and it’s now time for change. We’re going to transform their experience with Zzoomm’s Full Fibre network.
“The lockdown has accelerated the move to new working arrangements and boosted the demand for online entertainment and learning. Zzoomm has demonstrated that Full Fibre meets the need and will catapult Hereford into one of the best connected cities in the world.”

“Access to new Full Fibre broadband in Hereford will be a great boost bringing new jobs as well as access to the fastest broadband speeds in the country.

“The majority of improved broadband access in the county has been delivered as a result of Fastershire’s intervention, so it’s wonderful that new full fibre operators, like Zzoomm now see the county as an ideal place to invest.

“Around 92% of properties in the county can access a superfast service and 26% can already access full fibre gigabit capable connections throughout our rural areas. With announcements like this in the city, Herefordshire is really starting to lead the way.”